We went camping at Golden Gate Canyon State Park in August. We enjoyed the little hike from our campsite to “Dude’s Fishing Hole” (that’s the official name!).

At the end of August we hiked and camped (and the little ones rode their bikes) at beautiful Vedauwoo, Wyoming.

On the Turtle Rock trail, the kids enjoyed climbing and sliding on some large rocks, and we saw aspens, a beaver pond, and of course awesome rock formations. Vedauwoo is a very popular rock climbing spot, and though no one in our group was prepared for it, we enjoyed watching other folks climbing up the huge rocks.

Our campsite was huge, and it was nice to spend the night there and see the rocks change color as the sun went down. Those who were awake after dark (not me!) said the view of the stars was amazing. The next morning, we hiked the Box Canyon trail, which had some huge rocks that the kids enjoyed exploring. 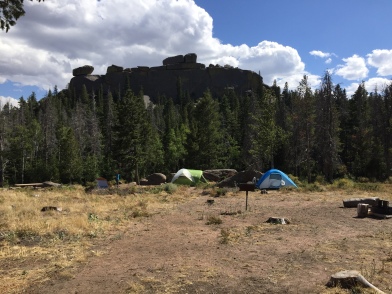 It was a great little camping trip, and such an easy drive from Fort Collins. I’m sure we’ll return for hiking and camping in the future.

We went camping in Colorado State Forest State Park for a weekend in early July. Almost as soon as we turned onto the dirt road that would take us to the North Michigan Reservoir camping area, we saw a tiny baby deer in the road, followed soon after by its mother. I can’t think of a better welcome to a park! As we got settled in our campsite, we had lots of hummingbird and chipmunk visitors. And when we walked down to the reservoir so the kids could throw some rocks in the water, we saw several fish jump up! The reservoir was very lovely, but swimming isn’t allowed. Maybe someday we’ll come back with a kayak or canoe to enjoy the water a little more!

As night approached, our neighbors told us that there was a fox that liked to check all of the campsites for snacks at night and in the early morning. Of course we were careful not to leave any food out overnight, and I heard some little fox-sized footsteps near our tent in the early morning. I also heard an owl, and a friend that we shared the campsite with thinks she heard a moose. 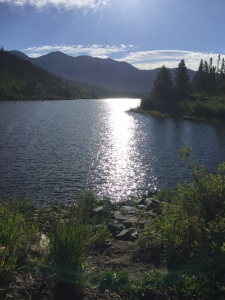 The next morning we took a nice kid-friendly hike around several beaver lodges. 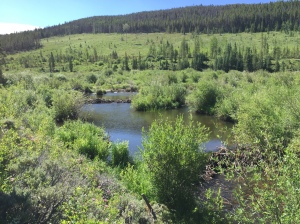 We didn’t see any beavers or other people on the trail, but we saw so many beautiful wildflowers! The flowers along the trail were very fragrant as we hiked. 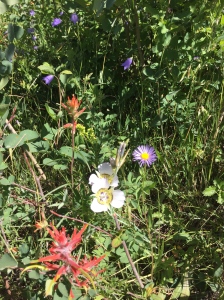 We had a great time, but this particular state park is well known for having lots of moose, and I hoped that by staying overnight we would have a good chance of spotting a few moose. We will just have to return another time to see some moose!