To ease us through the doldrums of January, we hosted a Trolls themed party for eight four-year-olds. The highlights of the party were a make-your-own troll hair headband craft, strawberry cupcakes, and dancing to music from the Trolls movie.

For the troll hair headbands, I mostly followed the instructions I found here. I figured it would be more fun – and less work for me – for the kids to make their own headband (with help from a parent) during the party. So I just did a little preparation by cutting lots of strips of the tulle (roughly 5″x22″) in advance. Then I laid out the tulle, headbands, ribbon, and decorations on a table so everyone could make their troll hair headbands whenever they wanted to.  Pretty soon there were a lot of Poppy-inspired trolls running around our house, and a few more unique trolls as well!

For party snacks, we had strawberry cupcakes (I based them off of Erin McKenna’s blueberry muffin recipe), hummus and pretzels, strawberries, blueberries, raspberries, and Trolls cereal.

We also printed out some Trolls coloring sheets to provide another party activity for the kids, and handed out Trolls goody bags as the guests headed home.

The little one has broken a lot of crayons over the last couple of years, and I’ve been collecting the crayon fragments because I figured we could eventually do something cool with them. This melted crayon craft project was just our speed, and our funky multi-colored crayons made great gifts for the kiddo’s friends. 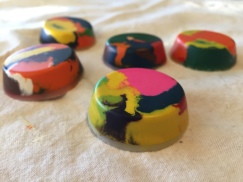 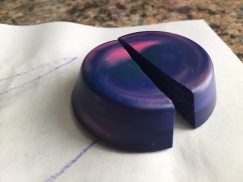 After peeling the paper off of the broken crayons, we put the crayon pieces in a mini muffin pan and baked them at 170°F until they were completely melted (24 minutes). Then we removed the muffin pan from the oven, and decided to quickly stir one of the new melty crayons (a mixture of purple, blue, and pink) to make a special new shade of purple. We left the other crayons alone for a marbled look. Then we put the muffin pan in the freezer for 20 minutes. Next I inverted the pan and the new crayons all came out easily.

Our special purple swirled crayon broke when it came out of the pan, so it’s possible that our stirring before freezing affected that crayon’s structural integrity, but it turned out really pretty. A few of the other crayons broke later on, but that’s not so bad because these crayons are actually easier to draw with when they are broken in half. Overall, this was a fun recycling project to do with a three-year-old!

This wreath is such a fun idea for a birthday decoration! It seems easy enough to make, too. Check out the simple directions over at Six Sisters’ Stuff.

I made a few Christmas presents this year, and now that they’ve all been gifted, I can share them here! 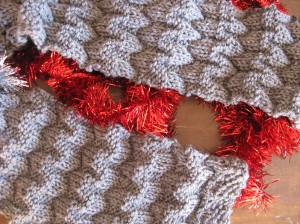 I don’t usually put too much effort into seasonal decorations in my home, but as I was picking up some clippings from a bush in front of our house, I thought that the little branches covered with bright red leaves were too pretty to throw into our dark and smelly compost bin. So I gave one branch a little shaping and plopped it in an empty wine bottle. Voila, fall decor! 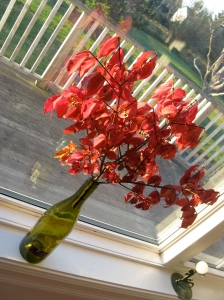 This gorgeous autumn leaf bouquet is a wonderful DIY fall decoration that will take a bit more time to prepare than mine, but is also far more beautiful. Check out the tutorial if you want to make one for yourself (or for me :))!

I think this framed vertical succulent garden is soooo lovely. There are instructions for how to make your own here.

Flip flop season is almost here and I need to make these! They are sooo cute! Simple instructions are here.

obsession of the week: knitting 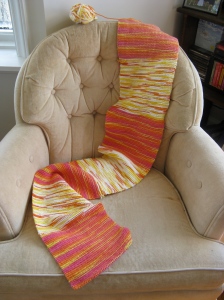 I love the grumpasaurus’ simple yet expressive grumpyface and his little balled up fists. So cute!

I think this pom pom wreath is a great simple crafty project. It uses the same sort of tissue paper pom poms that we made for the vine decorations at our wedding.

After months of planning and waiting, our wedding is now just about 6 weeks away! I just started working on some decorations that i think will be cute around our big party tent.

So far I’m finding them quite simple and quick to make. Easy to follow directions are here.