These apartment buildings with gorgeous murals depicting the seasons are awesome! 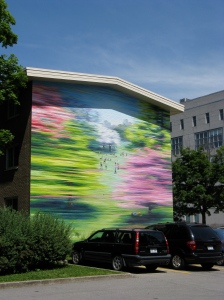 a day in montreal

We were very hungry when we arrived in Montreal. Since we enjoyed eating at Commensal in Quebec City, we went there in Montreal as well, this time for a quick lunch. The buffet was almost exactly the same in both locations!

With our stomachs full, we walked to our first destination: Notre Dame. Though considerably newer than the Notre Dame we saw in Paris a few months ago (construction starting in the 1800s rather than the 1100s), the facades of the two churches are actually rather similar.

The inside of this Notre Dame is far more colorful though. Check out that altar! This is a pretty opulent church. I don’t know how anyone thought this floor was a good idea though – it looks cheap and tacky to me.

Notre Dame is in Old Montreal, an area containing many well-preserved old buildings (some dating back to the 17th century). 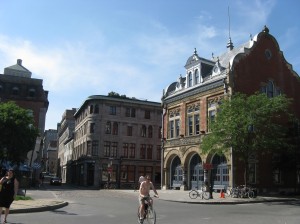 From there, we wandered to the Old Port, a nice park-filled area along the Saint Lawrence River. Looking across the river, we could see Habitat 67, a housing complex that has always fascinated me. 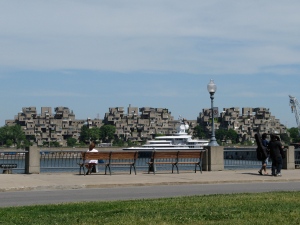 Next, we headed through Chinatown (stopping for a refreshing shaved ice) and up Boulevard Saint-Laurent. This street and Rue Saint-Denis stretch seemingly forever, peppered with cool shops and restaurants.

We met up with a friend for dinner at Aux Vivres, a popular vegan restaurant with a trendy diner vibe. I had the macro bol and Jeff had a gyro. Both meals were tasty, but huge. Montreal itself is also pretty huge. We walked around a lot, but definitely could have spent a few more days exploring this city.