We recently visited Hopewell Rocks, a provincial park along the Bay of Fundy with many remarkable rock formations. The late afternoon light was just right to catch some awesome silhouettes of the rocks at low tide. 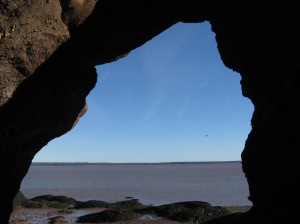 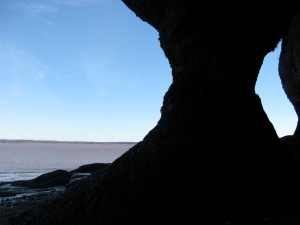 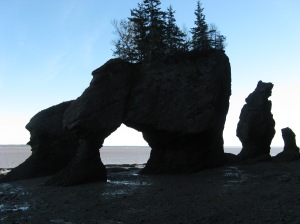 New Brunswick is probably best known for its coast along the Bay of Fundy (the bay between New Brunswick and Nova Scotia, famous for having the highest tidal range in the world). The Hopewell Rocks is one of the most popular spots to take in the wonders of the Bay of Fundy. And you can enjoy lots of pretty views like the one below as you drive along the Fundy coast. 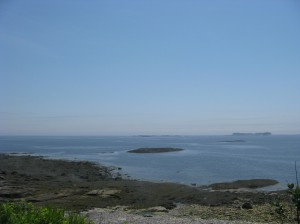 But as we planned a road trip from Halifax to Quebec, we wondered if there was anything interesting to see inland in western New Brunswick. It turns out that there are a lot of neat old covered bridges in New Brunswick, and the longest covered bridge in the world (391 meters long!) is in Hartland. The Hartland Bridge was built in 1901 and although it is only one lane wide, traffic still flows pretty steadily across it. The 111th anniversary of the bridge is also featured as the Google Doodle today! 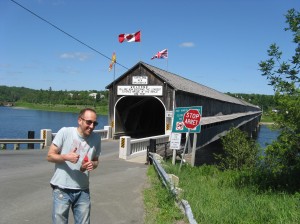 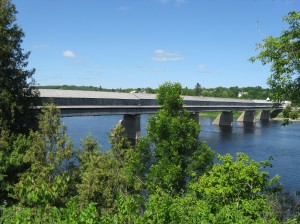 After stopping in Hartland, we continued on to Grand Falls, a town known for its impressive waterfall and gorge, as well as potato farming and processing. The waterfall at Grand Falls is apparently the largest waterfall east of Niagara Falls, with a drop of 23 meters. There are several nice hiking trails around the gorge, and opportunities for zip lining across the gorge! We were feeling mellow and just strolled along the hiking trails a bit. 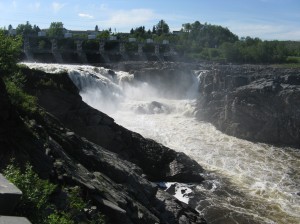 Finding a decent dinner in small towns like Grand Falls can sometimes be challenging for folks like me with several dietary restrictions. Luckily, Pizza Delight, a common Canadian franchise, offers pizza with gluten-free crust! Top that with tomato sauce and lots of veggies (and no cheese), and I’ve got a great meal!

On the way back to Halifax after Christmas, we decided to stop in Moncton again to try out another vegetarian restaurant. This time we stopped at Calactus Cafe for an early dinner. The menu has all sorts of different kinds of foods – sandwiches, salads, pizzas, and Mexican and Indian dishes.

I ordered a burrito, with tofu cream substituted for cheese. Interestingly, the burrito tasted more Italian than Mexican, but when I loaded it up with guacamole and salsa it was good. The tofu cream tasted kind of like ricotta, so I think the tofu cream would be great as a cheese substitute on one of their pizzas. Jeff had the Taj Mahal, which was also good, but only slightly Indian flavored. The pakoras were my favorite part of his meal.

The restaurant was quite busy and we found it interesting that most of the customers were speaking French. I knew that New Brunswick is officially bilingual, but I hadn’t expected to hear much French there. Hearing conversations around us in another language made me feel a bit like we were on vacation abroad, so that was fun. It’s exciting that Moncton has two great vegetarian restaurants!

As we were driving home for Christmas, we stopped in Moncton (New Brunswick) for lunch at Zen Garden, a great little Asian vegetarian restaurant and tea house. We shared a lunch combo (veggie dumplings, rice noodles, vegetables, and seitan skewers) and vegetarian California rolls (avocado and tofu). Zen Garden has a huge tea menu, offering 60 different teas, and bubble tea as well. We chose to wash all that yummy food down with a pot of mango green tea – delicious! We look forward to stopping in here again when we pass through Moncton!